Are you kidding me currently there are 76 BID’s throughout NYC and not one not one since it inception in 1981 has been voted on to dissolved and many of us are beginning to understand why – the fact is that once the BID is formed its pretty much up to the executive committee for each of its prospective BID to vote to dissolve and we do all know that this will never happen because in doing so they literally vote themselves out of an income and job. Another form of Taxation Without Representation! Everything is already structured in such a way to keep this home owners and property owners who opposes such BID formation or BID’s silent by their failure to disclose and notification process. Coney Island Mermaid Avenue businesses are strongly oppose to such formation but everything had fallen on death ears – in other words this is a done deal that will be rubbered stamped despite local home owners and businesses opposition. The new wave of SBS the Alliance for Coney Island and the EDC. 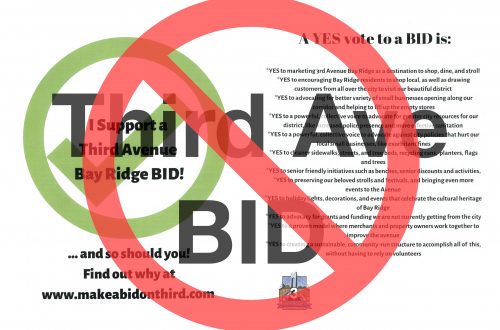 Its OK we collect these taxes says the 3rd ave BID

PROPERTY TAXES DUE AND LATE!